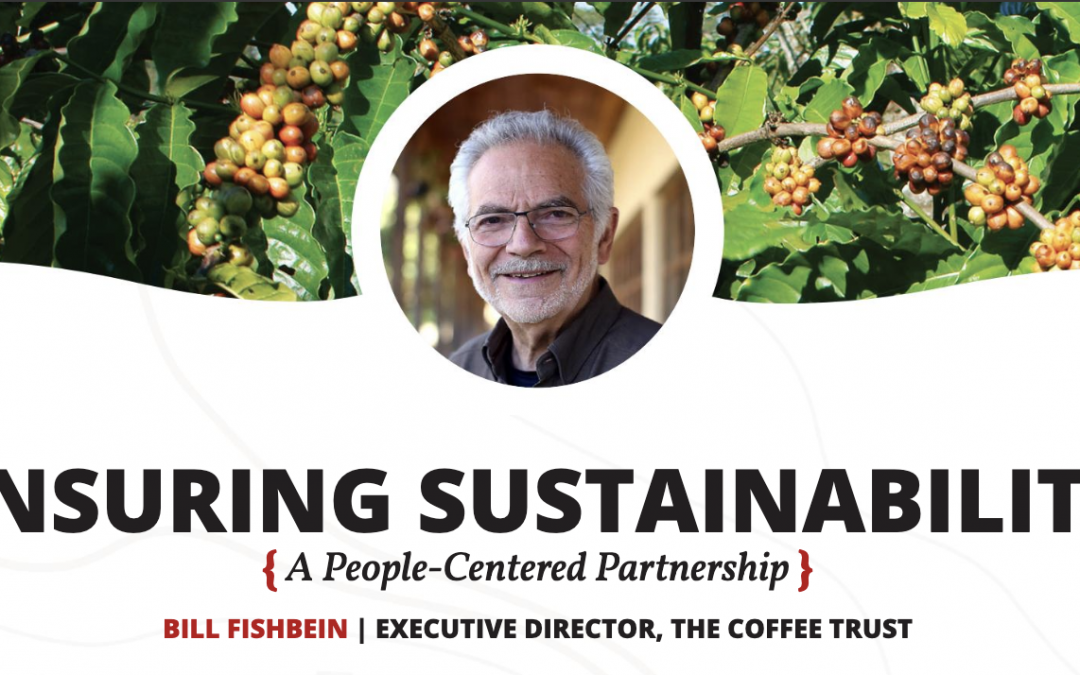 Note: In June, 2022 this article written by Bill Fishbein, Executive Director of The Coffee Trust, was published in Coffee Talk Magazine. View the full issue here.

The article in Coffee Talk Magazine, “Ensuring Sustainability,” by Grayson Caldwell, sheds light on one of specialty coffee’s most egregious deficiencies that have been hidden in plain sight for decades: the inexcusable inability of specialty coffee to make a credible effort on behalf of coffee producers – who are the foundation upon which the entire trade is built – to earn a living wage. On a positive note, Grayson points to the digitally oriented, data driven, Verified Living Income (VLI) partnership between Heifer International, Bellwether Coffee, and Sustainable Harvest and the effort to liberate coffee producers from the role of “price takers” in a global trade that sets the price for producers to “take.”

That said, I would encourage VLI to use a less data-driven approach in favor of a more people-driven approach. It never ceases to amaze me how much data drives our efforts at origin. No matter how often we learn how different one producer is from another and no matter how many times we realize that each micro-climate holds within it its own unique characteristics, we still try to establish some common formula to solve one issue for all farmers. No matter how much data we collect, we cannot possibly determine a one-size-fits-all Living Income for all producers. There are a number of reasons for this. Here are two:

1) If we in the north are in any way involved in the data analysis, let alone the results, the entire exercise will be riddled with the conflicts inherent in our profit motive.

2) Producers need more income. We know this already without any further data. How much income they need is none of our business – no more than our income is any of their business, although those figures would surely raise a few producers’ eyebrows.

Specialty coffee’s lucrative profits are earned here in the States and in other more economically advanced nations. Paltry producer profits (otherwise known as losses) are earned at origin. We so often refer to producers as our partners. How about a genuine “we’re in this together” partnership?

It doesn’t require the digital world to lift a finger to walk the talk toward a living wage for producers. Consider the following non-datadriven approach toward the same goal. It’s just one of many possible people-driven approaches, and all it requires is getting out of our data-laden mindset and recognizing that this issue could have been resolved years ago, long before all this data was accessible anyway.

THE STRATEGY: It is reasonable to assume that a 50-50 split among all participating producers and merchants may not be possible right away. So, merchants would state the 50-50 goal and a timeline for getting there. Each merchant may state a different formula, such as, say, ten years at 10% per year. From time to time, adjustments may need to be made to the timeline of the 50-50 partnerships. These adjustments would be public, perhaps displayed on a thermometer-like graphic on social media or in stores, clearly articulating each merchant’s path toward their 50-50 For Farmers Goal.

When a serious Fair-Trade campaign was established, consumers were easily convinced to pay higher prices for Fair-Trade coffee. So, undertake a serious VLI Campaign.

Who better to be a frontline participant and leader? The Specialty Coffee Association (SCA)! What a goal for SCA, the global coffee association, to spearhead an international marketing campaign informing consumers that the price of coffee is finally going to rise incrementally so farmers can survive and consumers can continue to enjoy specialty coffee. And who better to convince the SCA that it is in their interest to undertake a serious campaign towards a real living wage for producers? The original VLI stakeholders themselves – Bellwether Coffee, Heifer International, and Sustainable Harvest. They are already committed to the goal.

The SCA’s international campaign could then complement a Barista Guild Campaign, a focused and concerted campaign like the SCA’s, but with a more intimate, over-thecounter, up-close-and-personal communication, strategically interacting with consumers face to face.

When quality in the cup comes at the expense of quality of life at origin, it makes a mockery of specialty coffee’s long-standing association with the word quality. Specialty Coffee never ceases to celebrate itself with championships, awards, parties, and personalized designs on each and every espresso drink that passes over the counter. But by sweeping a living income for producers under the rug, specialty coffee has been hiding the truth and running cover for large chains and independents that have merely been adding paltry premiums for producers on top of a paltry C-price. I believe that we can all be a part of a meaningful change. I’m hopeful that by incorporating the SCA and Barista Guild with the energy and enthusiasm reflected in the VLI movement, putting a people-centered strategy in place to establish a true Living Income for producers is possible. In fact, it’s essential.

And there’s no time to lose.